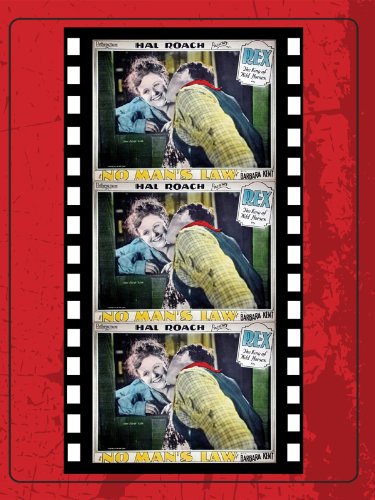 Movie: Man's Law(1927)[tt0018204] Two thugs plot to kill an old miner to get his claim, but one of them lusts after his beautiful daughter and wants her first.

wmorrow59 on 13 March 2005
Here's a genuine oddity: a silent Western drama produced by the Hal Roach Studio, which stars two of the studio's most famous comedians, Oliver Hardy and James Finlayson, in serious roles. Actually, the top billed star of No Man's Law is Rex the Wonder Horse -- and no, I'm not kidding -- for this film was made at the height of the "animal adventure" craze initiated by the great success of canine star Rin Tin Tin. Rex is certainly a magnificent-looking stallion, but he isn't the central figure in this story; he turns up only occasionally at key moments to perform good deeds, while the plot is driven primarily by the actions of the human characters. Hardy in particular has a great deal of screen time, albeit in a role that could hardly be further afield from the way we tend to remember him.It should be noted that this isn't the kind of Western that boasts cattle stampedes, large scale shoot-outs, hostile Injuns or the Pony Express; there isn't even a saloon. In fact, the entire cast consists of only four people, stuck in the middle of nowhere. The story concerns an old miner (played by Finlayson) and his daughter (Barbara Kent) who live in a tumbledown shack in a remote portion of a bleak and dusty desert. Here they are menaced by a pair of villains, one of whom, Spider O'Day (Theodore Von Eltz), turns out to be better than he seems, while the other, Sharkey Nye (Hardy), is a greedy, sadistic, cowardly sleaze-ball. That's right, this movie shows us what happens when dear old, tie-twiddling Ollie goes bad, and it's not a pretty sight. Hardy is made to appear quite ugly: his hair is buzzed short, he's unshaven, he wears an eye-patch over one eye, and his clothes are so stained with sweat you can practically smell him.I happened to see No Man's Law at a public screening with an audience, and, naturally enough, Hardy's initial appearance was greeted with chuckles. And indeed, his first scene with Von Eltz has elements of intentional humor, as when Sharkey expresses his fear of dying in the desert and winding up as food for buzzards. Ollie's expressions and gestures are just as we expect them to be, and his outfit looks funny at first. But as the movie rolled grimly along it became clear to the viewers that this was not meant to be a comedy, and the laughter dwindled. The mood of No Man's Law is gloomy and dark. The story concerns violent conflict between the male characters over the possession of a gold mine -- and, eventually, over the fate of the miner's daughter. Sharkey Nye proves to be an absolute rotter who attempts to kill the old man and rape the girl. As a lifelong Laurel & Hardy fan it's difficult to describe how I felt seeing Ollie portray this character. Watching him attempt to murder Finalyson, for real, can only be compared to watching Elmer Fudd blasting away at rabbits and ducks with real buckshot. Only the realization that Sharkey is an inept and ineffectual villain prevents this movie from being a more disturbing experience than it already is.On a happier note, youthful leading lady Barbara Kent is cute as a bug, making her entrance flouncing around the shack in a pair of over-sized pajamas and later taking a nude swim, very much like Mabel Normand in Mickey. (Mabel's longtime associate Richard Jones, who also directed Mickey, acted as supervisor on this film and co-authored the script, so the similarity is surely no coincidence.) Miss Kent, who rather resembles Paulette Goddard, brings some vivacity and desperately needed perkiness to this project.In sum, while No Man's Law is a fascinating novelty for Laurel & Hardy fans (and, of course, for any remaining fans of Rex the Wonder Horse), it's not exactly a joy ride, and I must confess I felt a little relieved when it was over. Relieved, and ready to take another look at Way Out West or Sons of the Desert, to help expunge memories of Bad Ollie from my thoughts, and revisit the guy who always makes me laugh.