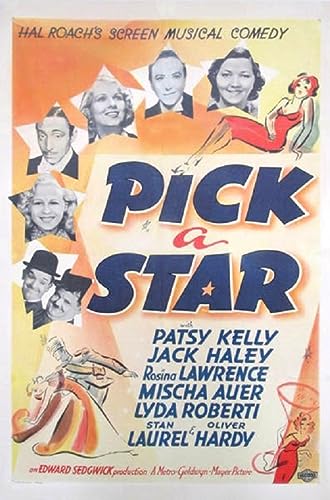 Movie: Pick a Star(1937)[tt0029401] A Cinderella story of a young country girl who comes to Hollywood and achieves movie stardom with the help of a publicity man.

rsoonsa on 22 March 2002
Director Edward Sedgwick, an old hand at visual comedy, successfully leads this Hal Roach road show which tenders a fast-moving and adroit scenario and excellent casting, employing a large number of Roach's reliable performers. Although the film was originally plotted as a vehicle for Patsy Kelly, sunny Jack Haley stars as Joe Jenkins, a young Kansan who sells his auto repair business and journeys to Hollywood, where he attempts to wangle a screen role for the girl he loves, star-struck Cecilia (Rosina Lawrence). Sedgwick, who prefers using the entire M-G-M studio as his set, does so here as Cecilia, always ready for an audition, is treated by a would-be paramour, cinema star Rinaldo Lopez (Mischa Auer), to behind-the-scenes action of, naturally, a musical comedy, featuring Broadway headliner Lyda Roberti. Laurel and Hardy provide several enjoyable interludes, including their well-known skit involving a tiny harmonica, and we watch fine turns by such as Joyce Compton, Russell Hicks and Walter Long. On balance, one must hand the bays to Mischa Auer, who clearly steals the picture as an emotional movie star, a role which he largely creates, and to the director for his clever closing homage to Busby Berkeley's filmic spectacles.

A Chump at Oxford