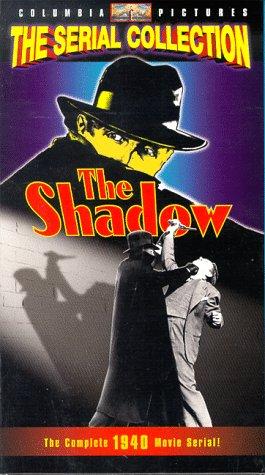 Movie: The Shadow(1940)[tt0033040] Columbia's 9th serial, slotted between "Overland With Kit Carson" and "Terry and the Pirates", was intended to have Lorna Gray in the role played by Veda Ann Borg, and to have been co-directed by D. Ross Lederman and Norman Deming. The credits specified the serial was "Based upon stories published in "The Shadow Magazine", while the ads proclaimed it to be "right out of the air waves and magazine stories." What appeared was a mixture of both with Lamont Cranston the true identity of The Shadow, although Lamont Cranston was only an occasional disguise of the pulp magazine Shadow. The hypnotic invisibility of the radio character was completely ignored, as was the almost invisible "Living Shadow" of the pulps.(In the serial, the only invisible man (The Black Tiger) was the villain, as even James Horne probably realized that six to ten henchmen taking orders from an invisible man was more plausible then six to ten henchman falling all over the place from unseen blows delivered by an ... Written byLes Adams <longhorn1939@suddenlink.net>

bsmith5552 on 23 June 2001
"The Shadow" is a fairly routine serial based on a popular radio serial of the day. It is raised a level by the casting of Victor Jory in the title role. Jory was usually cast as a villain in westerns (both the "A" and "B" varieties), but this time gets to play the hero and get the girl. Jory was generally better than his material and this role is no exception. He plays three different parts, that of Lamont Cranston the crusading crime fighter, Lin Chang an undercover "Chinese" gangster and of course the Shadow. Jory's rich resonant speaking voice was perfect for the Shadow character. The Lin Chang character is a little over the top and was probably included because of the popularity of Chinese screen detectives (Charlie Chan, Mr Wong etc.) at the time.The plot is strictly "B" movie. A master criminal called The Black Tiger is trying to take over the city through his terrorist attacks led by "B" veterans Jack Ingram and Charlie King among others. The Shadow naturally foils him at every turn. The Black Tiger has the power to turn himself invisible and does so in every chapter. In true serial tradition, his identity is not revealed until the final chapter.You can also expect to see multiple fights, explosions, car chases and hear an ear-splitting scream or two from the heroine (Veda Ann Borg) in most chapters as well. I was amazed at the number explosions, collapsed ceilings and car wrecks that Jory walks away from unscathed. But hey, we're talking Saturday Afternoon Matinees and who really cared how the hero escaped, as long as he did.