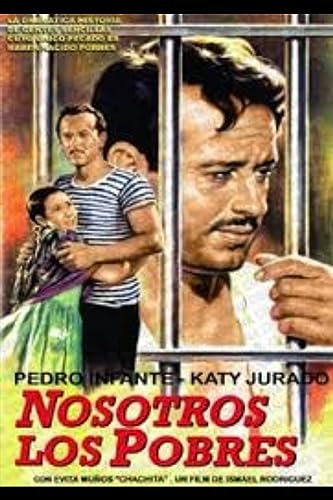 Movie: Nosotros los pobres(1948)[tt0039668] Two kids take a book from a trash can. They begin to read the story of a poor neighborhood in Mexico City. Carpenter Pepe "El Toro" (Infante) lives with his daughter Chachita (Munoz) and woos pretty "Chorreada" (Pavon). Around them, a group of fellows live their lives in many ways: a pair of always-drunk women known as "La Tostada" (The Toast) and "La Guayaba" (The Guava); a beautiful woman (Jurado) who always oversleeps; a hooker with pneumonia (La Tisica) with a dark past. Tragedy comes when Pepe is falsely accused of robbery and sent to the jail. Written byMaximiliano Maza <mmaza@campus.mty.itesm.mx>

F Gwynplaine MacIntyre on 18 March 2004
'We the Poor' is a somewhat overwrought drama by Ismael Rodríguez, a Mexican director whose films often deal with social injustice and economic hardship.The hero of this story is José, nicknamed 'Pepe the Bull', although he looks more like Keenan Wynn than any sort of livestock. Pepe is a Mexican working stiff: the sole support of his family, including his young daughter Chachita and his paralysed mother, who can't speak or move but who can roll her eyes. Ay caramba, can this woman roll her eyes!Pepe works hard, but the family are just barely getting by. (They live in what appears to be a slum neighbourhood, although it's extremely clean.) One day the caretaker walks in and helps himself to the rent money, which Pepe has stashed in a hole in the wall behind a photograph. The only witness to the theft is Pepe's mother. Being paralytic, she can't cry out during the robbery, and afterwards she can't tell Pepe who stole the money. But she sure can roll her eyes, while the camera zooms in for a close-up. (It utterly beggars belief that Pepe and Chachita haven't worked out some means of communication with his mother, such as teaching her to blink in Morse code. Even the Bowery Boys were able to figure out that one.)Now Pepe can't pay the rent, and pretty soon along comes a Mexican rent-collector (Sancho the Bailiff?) to evict his family. There's a truly ludicrous scene in which the removal men take away *every* ornament and stick of furniture from Pepe's house. Then they come back and dump his mother on the floor, so they can take her wheelchair. They put the wheelchair in the lorry, then they come back again and take Chachita's doll. Buenos hombres! Meanwhile, Pepe is in el juzgado ('the hoosegow') because he's been framed for someone else's crime.Despite the soap-opera plot line and some very obtrusive background music, there's much in this film that impressed me. There's an excellent montage sequence, in which the caretaker is plagued by guilt for his theft. (But not enough to give back the money.) He keeps seeing pairs of circular objects (two brass hoops in a bedframe, two saucepans on the wall) and imagining them as Pepe's mother's eyes, staring at him remorselessly. One montage shot in this sequence seems to have been inspired by a similar shot in Fritz Lang's 'Metropolis'. (Always steal from the best.)Some of the frame compositions in the prison sequences are extremely impressive. I started to laugh at the striped uniforms on the prison inmates, which reminded me of pyjamas, or the striped clothes worn by convicts in old Three Stooges movies. But apparently prison inmates in Mexico in the 1940s did indeed wear such uniforms. I had some trouble following the dialogue: many of the characters in this movie use slang expressions that were very up-to-date for urban Mexicans in 1948, but which are inaccessible to Spanish speakers from non-Mexican cultures. A Mexicana friend who watched this film with me (and who was born well after it was made) told me that she couldn't understand most of the slang.There are some truly ludicrous soap-opera plot contrivances in this movie. Eventually we learn that Pepe's relationship with his daughter Chachita is not what it seems. Some of the twists in this movie are quite implausible. But it's extremely well-made, and the visuals are impressive throughout the film. I doubt that 'Nosotros los Pobres' is an accurate depiction of life in Mexico in 1948, but plenty of Hollywood movies are equally inaccurate in their depiction of life north of the border. This movie is highly entertaining, and I'll rate it 7 points out of 10.