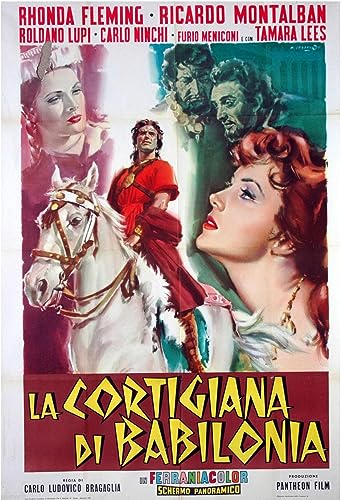 Movie: The Slave Woman(1956 (UK))[tt0049094] In 600 BC, Babylon is conquered by the army of King Assur. When the Chaldean people refuse to submit to his rule, their leader Ahmal (Montalban) flees into the country and is hidden by a beautiful goatherd named Semiramis (Fleming). She is later captured, becomes the King's favorite and is soon made queen. When Ahmal himself is made a prisoner, he believes she has betrayed him. The king's wicked cousin tortures Ahmal and uses both him and Semiramis in his plot to depose the king and seize power for himself. When he does murder Assur, he blames Semiramis and prepares to burn her at the stake. But Ahmal and his people, toiling as slaves in a nearby quarry, are alerted by an informant... Written byR. Scott Gibson

Bootsy on 10 August 1999
Wow. Saw this one the other night on TCM. Ricardo Montalban's name in the credits was the main draw, and he didn't disappoint. Montalban sports one of the most ridiculous mullets you'll ever see, short Ceasar-style bangs in front and Shirley Temple-style ringlets in back. Bad. The whole thing is laughably poor. The dubbing is out of sync, the costumes are a mish-mash of every known genre, the sets look like they're leftovers from some Egyptian epic. That said, if you're an aficionado of bad movies, this one will keep you busily making fun of it from start to finish. Who knew that the ancient Babylonians were such a braless and breasty bunch?

Serpent of the Nile

Those Redheads from Seattle

Lost Treasure of the Amazon