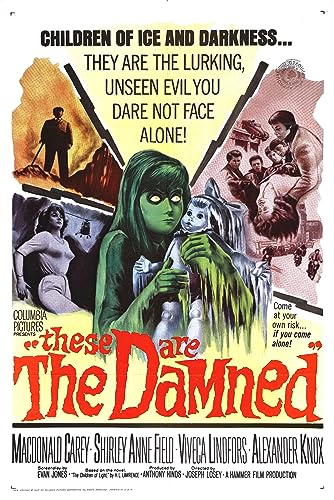 Movie: The Damned(1963)[tt0056576] The middle-aged American Simon Wells sails in his boat to Weymouth and stumbles with the twenty year-old Joan on the street. He believes that she is a prostitute but she is actually part of a scheme of a motorcycle gang to rob tourists. Simon is brutally beaten up by her brother King and his gang. The policemen find the wounded Simon and take him to a bar to recover, where he meets the military Bernard and his mistress Freya Neilson. On the next morning, Joan challenges King and meets Simon in his boat, and King and his gang hunts Simon down. Joan and Simon spend the night together in an isolated house and on the morning, they are located by the gang. They try to flee and stumble in a top-secret military facility managed by Bernard. They are helped by children and brought to their hideout in a cave. King falls in the sea while chasing the couple and is also helped by a boy and brought to the same place. Soon Joan finds that the children are cold as if they were dead. What is the ... Written byClaudio Carvalho, Rio de Janeiro, Brazil

Coventry on 30 August 2007
Of all the Hammer films I've seen so far, and they are quite numerous, "These Are The Damned" definitely ranks as their strangest and most curious effort. This legendary British production studio specialized in straightforward monster movies and gorier updates of classic horror tales, but this particular film is something entirely different and actually quite hard to categorize. There are two principal – and extremely opposite – story lines in this film and, even though they seem impossible to blend, director Joseph Losey pulls it off without much effort. The first half (approximately) of the story is more or less reminiscent to such films as "West Side Story" and "Seven Brides for Seven Brothers", and … NO, I'm not kidding. Set on a small and isolated British island community, we're introduced to King (the phenomenal Oliver Reed), his oppressed sister Joan and their docile gang of youthful thugs. The gang targets tourists, like the unfortunate American boat owner Simon Wells. Joan seduces and lures Simon to a quiet alley, where King and C° are waiting to rob and attack him whilst whistling a really awesome tune ("Black Leather, Black Leather … Smash! Smash! Smash!). But Joan is fed up with her life-style and dominant brother and returns to Simon the next day, hoping to escape together. As you're subsequently expecting the rest of the story to revolve on an exciting chase & battle between the two parties, the tone and atmosphere of the film suddenly changes completely and turns into an awkward Sci-Fi ploy! Fleeing from King, Joan and Simon end up in a cave where a bunch of children are apparently kept prisoners by the military and the government. There's something odd about these kids as they all share birthdays, feel extremely cold and respond mysteriously to Geiger counters… The sudden change in atmosphere is unusual, but very original and fascinating! The second half of the story is clearly influenced by the success of "Village of the Damned", which happens to be one of my favorite Sci-Fi tales and easily of the greatest classics in the genre. A fairly high level of suspense is sustained throughout both story lines and there are several genuinely creepy moments to enjoy. The acting performances aren't superb, but Losey's direction is surefooted enough to compensate. The stylish black & white photography adds tension to the already grim atmosphere and – as said – the theme song is truly terrific. I read about "These are the Damned" before, but it's an obscure and hard-to-find film. So, thank you very much good people of the BBC, for programming this beauty!

Never Take Sweets from a Stran

The Revenge of Frankenstein

The Two Faces of Dr. Jekyll

The Stranglers of Bombay