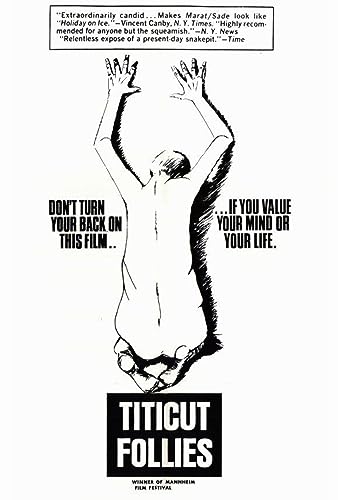 tieman64 on 22 September 2008
"Titicut Follies" is a controversial documentary by Frederick Wiseman. The film records events at the Bridgewater State Prison For the Criminally Insane. It was shot in 1967, but was subjected to a worldwide ban until 1992. The Judicial Court ruled that the film was an invasion of inmate privacy, but in reality Wiseman had been granted full permission to film at the prison. The ban was merely an attempt by the authorities to silence the uneasy truths that Wiseman's camera had uncovered.Wiseman is oft said to be of the leading proponents of cinéma verité. His films have no narration, music or titles. He simply observes his subjects with cool, clinical detachment. Whatever Wiseman records, the viewer is left to interpret for themselves. Nothing is explained.Along with Emile de Antonio, Wiseman is one of the godfathers of documentary cinema. Throughout his career, he'd established the standard for what is now known as "observational" or "objective" documentary film-making. Unfortunately, this tag obfuscates the many symbolic, didactic and "engineered contrasts" found in Wiseman's films. Wiseman's films aren't strictly "objective". They have points to make, and are never free of his subjective biases.Unlike many documentary filmmakers, Wiseman's films all focus on institutions. His subjects are whole organisations, and he typically generates "drama" by simply observing the various cogs and people at work within these societal machines. High schools, welfare offices, zoos, hospitals, ballet groups, army basic training camps, small towns, ICBM bases and business corporations are just some of the institutions he's tackled.With "Titicut Follies", Wiseman goes behind the walls of a Massachusetts Mental Institution and exposes the treatment of inmates by guards and social workers. The footage he shoots is both macabre and revolting. The mental institution pretends to be a place of logic and the scientific method, but Wiseman reveals it to be a place of chaos and absurdity. Patients are deemed "mentally unsound" simply for not conforming to the institution's absurd standards. They're routinely teased and bullied, and left to roam the corridors completely naked. One articulate patient attempts to get his doctor to explain why he's being imprisoned, but the doctor has no answer.Several inmates, one a socialist and the other an intelligent Russian, seem to be in the institution for political reasons. Both are of sound mind, but because they sympathise with the communist cause and distrust American's involvement in Vietnam, they've been labelled paranoid schizophrenics and jailed indefinitely.The hardest scene to watch is of a forced feeding. A doctor smokes a cigarette as he inserts a long rubber tube into a patient's nostril and pours soup into a funnel. Halfway into the procedure, the doctor's cigarette falls into the funnel. In a surprisingly heavy handed directorial intrusion, Wiseman inter-cuts this painful scene with glimpses of the patient's corpse being prepared for burial.Frederick Wiseman is a curious case in cinema. You can arguably group modernist "brain" cinema into two categories: left brain artists and right brain artists. Left brain artists (Antonioni, Kubrick, Bresson, Haneke etc) are very rare. They're logical, sequential, rational, analytical, objective and look at things in terms of parts, units or sections.Right brain artists are more common. They're intuitive, holistic, synthesising, subjective and look at wholes. They like randomness and communities. Altman, John Sayles, Spike Lee, Fassbinder, Wenders, Malle, Fellini and Lynch are good examples.Wiseman's form is very much like a Stanley Kubrick film. He sees his subjects in terms of sections and parts. In terms of machines and larger constructs. His camera is always distant, detached and objective. One can see echoes of "Full Metal Jacket" in Wiseman's "Basic Training" and "2001" in "Zoo".But behind this is an artist who seems to embrace improvisation and chaos. Wiseman works fast with a single camera and a simple microphone. He catches what he can, without purpose and plan, sculpting his films entirely in the moment. This lends his films, when viewed together, a strange feel. You get the sense of large social constructs, giant institutions and sprawling communities, machine like in their workings and routines, and yet within these machines, Wiseman captures fleeting glimpses of humanity, spontaneous and wild.8/10 – This is a nightmarish little film. It's not as great as some of Wiseman's later flicks, but it is perhaps his most influential. To this day it remains the only movie in U.S. history to be banned for reasons other than obscenity or national security. Director Milos Foreman would screen "Titicut Follies" for his crew prior to making "One Flew Over The Cuckoo's Nest" and Paddy Chayevsky would base "The Hospital" on Wiseman's "Hospital". Makes a good companion-piece to Wiseman's "Near Death".