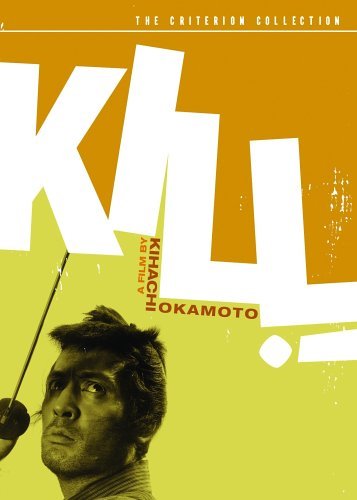 patryk-czekaj on 27 December 2012
With all its dark humor and cynical attitude towards samurai code of honor, Kill! comes as a truly unformulaic and genre-bending period drama. Written and directed by the famous Kihachi Okamoto, the film's loosely based on Shūgorō Yamamoto's widely read short story Peaceful Days (also the basis for Kurosawa's Sanjuro). Kill! (or Kiru in Japanese) combines a well-crafted, complex plot with audaciously choreographed fight scenes, some visually-stunning, long shots of Japanese landscapes, with a bunch of witty - and often farcical - dialogues.The picture presents a story about two luckless, hungry would-be warriors, who find themselves in the middle of a ferocious battle between the opposing sides of a dangerous yakuza clan. Genta (Tatsuya Nakadai) is a former samurai, who got tired of the difficult lifestyle of a wandering ronin. He wasn't able to find any other work, and just wound up in the deserted city, where he met Hanjiro (Etsushi Takahashi), an ex-farmer who wants to become a samurai, but didn't have a chance to prove his abilities yet. As soon as the two discover that the abandoned city is a battleground for a merciless group of samurai retainers, it's simply too late, and they get dragged into the whole deadly intrigue in just a matter of minutes. It becomes clear that one side of the conflict betrayed the other, and the resolution of the struggle might come only when one of the parties kills the other. In the cutthroat game of murder and betrayal, the two main characters take differing sides, and in order to achieve success they need to kill each other at first. Though Hanjiro's first assignment as an aspiring samurai is to dispose of Genta, he hesitates for a long time, as Genta proved to be a valuable source of information regarding the precious samurai life. As the tension mounts, and both groups become more and more irritated and bloodthirsty, Hanjiro and Genta decide to team up and outsmart everyone in their way, leading on to one of the most riveting and satisfying finales in a samurai picture ever filmed.The problem with Kill! is that it's not as well-known around the world as it really should be. Moreover, it's simply an under-watched samurai epic, even though it actually shares - and makes fun of - all the far-reaching values of many prominent Kurosawa pictures. Here the portrayal of typical samurai warriors is a most parodical one, as Kill! shows so deliberately that there are those, who behave only badly and those, who behave only honorably, and there's nothing in-between. It's a game-changer of sorts when it comes to the topic of samurai, given its highly fanciful attempt at denuding all the hidden aspects of those seemingly convoluted personas.The cinematography is as raw-looking as it is actually picture-perfect. It brings out all that's eye-popping about the beautiful, yet blood-filled, Japanese scenery.Kill! also references various other samurai pictures, playing with the idea of a dramatic and serious samurai film, giving itself an utterly lighthearted tone. Kihachi Okamoto created a little, under-appreciated gem that's not only engaging, but also truly smart and concise.