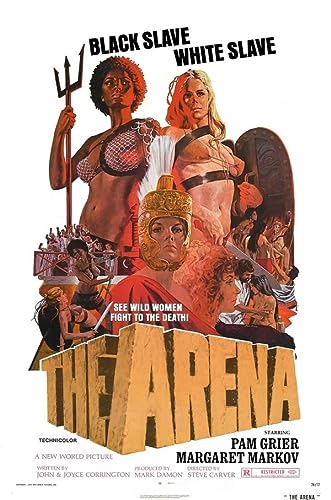 Movie: The Arena(January 1974 (USA))[tt0069729] Two thousand years ago, the people of Rome are so blasée, so used to violence, that entertaining them becomes a political problem. Someone suggests, after a hectic girl fight in a kitchen between a Nubian and a Viking slave, as a joke, that they should fight in the arena, instead of male gladiators. The idea is approved, though - and a female "Spartacus" theme follows. Written byArtemis-9

lost-in-limbo on 7 September 2006
After being captured by Roman soldiers, a group of women are sold off as slaves. After a continuous poor showing with the men gladiators. Soon enough, these women servants become the showpieces and now they're fighting each other to the death in front of the bloodthirsty Rome crowd and its powerful oppressors. But these ladies don't plan on living like that and do their best to organise an all-out revolt.What we get from this Corman production is a boldly, sound drive-in exploitation that follows quite a straightforward formula, which seems to work all the time. On this occasion, chuck in a bunch of female beauties in skimpy outfits in a Colosseum backdrop and watch them go toe-to-toe! It's basically a WIP story within a different era. When you got the likes of the fierily titillating Pam Grier and the ravishingly magnetic Margaret Markov sporting it out. You know you're in for a fulfilling appetizer! This gladiatorial stout supplies plenty of fleshy impulses and gets its hands dirty to invoke the gritty thrills and slimly sleaze. The barbaric attitude within the story superbly captures the gropingly seedy underbelly of the Roman Empire and that viscous instinct for survival to get on top. Simply what you see here is what you get. The women are the main centrepieces and director Steve Carver knew that by exploiting every opportunity. It does have its moments when some ponderous stretches creep in, but when the ladies get their gear on, it finally kicks into gear. The script is extremely leaden (with some corn riddled hokum) and there's not much in the way of character progression, while the performances on the other-hand go down rather well and trump in with a crackling rapport. The very capable Rosalba Neri pops in as the tantalizing ice-queen Cordelia. Lucretia Love and Paul Muller chip in with enjoyably campy performances.The glorious cycle of action is very well organised in some frenetic spurts and spanking scenes. The kinetically compact cinematography and a triumphantly heart-pounding music score demonstrated this energy. The atmosphere is paved on very convincingly and truly bait's the audience.You can't take any of it very seriously, as it can get rather goofy. Although for what it is, it's a well-made and acted piece that entertains.