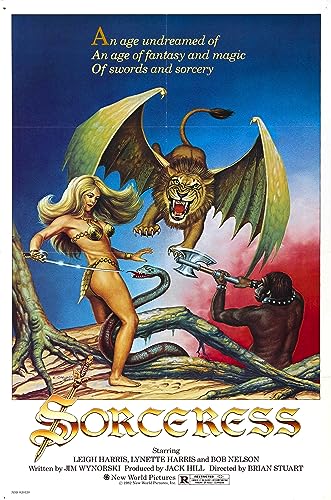 Movie: Sorceress(March 1982 (USA))[tt0086340] Hell-bent on becoming the ultimate ruler of the universe by sacrificing his firstborn, the powerful conjurer of illusions and master of the Black Arts, Traigon, makes an unholy pact with the evil deity, Kalghara. However, fate has other plans, and as the magician's wife gives her last breath to protect her newborn twin daughters, Traigon dies. Nearly two long decades later--imbued with the unlimited white force of their mentor, Krona--the dauntless warrior-sisters, Mira and Mara, embark on a dangerous mission to avenge their slaughtered mother and to defeat the resurrected warlock once and for all. Who shall live and who shall die in the final clash between good and evil? Written byNick Riganas

EL BUNCHO on 7 December 2001
In the fall of 1982 (which is the correct release date) I went with a friend to see this film simply because the poster looked so cheesy. For some odd reason this was the second half of a double bill with WITHOUT A TRACE, a serious film about child kidnapping! Including my friend and I there were about eight people in the theater when SORCERESS began to roll, and I dare say that the eight of us got at least $100 worth of laughs for our $3.50. This is one of the most inept films from the short-lived barbarian flick cycle, and that's really saying something! It appears that they lost the dialogue track and had to re-dub, giving the movie the look of a foreign film. I won't go into the plot since the previous review really nails it, but you simply haven't lived until you see the "epic" battle between gods Calgara (a giant Mexican woman's head with oatmeal on half of her face) and Vitaan (a seriously fake foam-rubber winged lion/man.goat?). As bad as this is, it is never boring, and is so crazily entertaining that I honestly rate it among my ten all-time favorite movies. VIVA SORCERESS!!!

The Warrior and the Sorceress