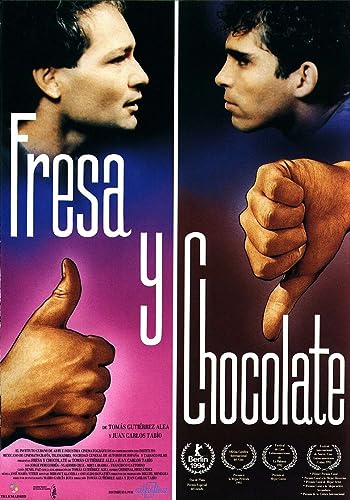 Movie: Strawberry and Chocolate(1994)[tt0106966] Diego, a cultivated, homosexual and skeptical young man, falls in love with a young heterosexual communist full of prejudices and doctrinal ideas. First come rejection and suspicion, but also fascination. Fresa y chocolate is a coming-of-age story, told through the development of a great friendship which overcomes incomprehension and intolerance. Written by<oscar.esteban@p4.virtual.encomix.com>

relias on 7 May 2003
`Strawberry and Chocolate' (1993)is set in contemporary Havana. The luster of that city has dimmed after nearly four decades of Castro's rule. David (Vladimir Cruz), a student and avid Castro supporter, is on the rebound after losing his girlfriend. He had taken her to a cheap hotel to make love, but the place is so shabby it puts her off. Instead, he promises never to touch her until they marry. In the next scene, she marries someone else while David stands sullenly among the well wishers at the registry office. Then he meets Diego (Jorge Perugorría). Diego, who is flamboyantly gay, parks himself at David's table in an outdoor café to eat a dish of strawberry ice cream. For David, this is suspicious because chocolate is also available. Diego says some people like chocolate, some like strawberry, an innocuous line that gives the movie its title and also hints at the odd couple relationship to follow. Diego does not disguise his sexual interest in David, but is also interested in giving David an education the regime denies him. The older man is far more cultured than his new friend. Offers of books banned in Castro's Cuba, such as a novel by Mario Vargas Llosa or the poems of John Donne, lure David to his apartment for tea and talk. When David reports that Diego is involved with a forbidden art exhibit, he is directed to befriend Diego to find out more information. `Strawberry and Chocolate' thus sets their emerging friendship against the backdrop of two bleak themes: anti-gay prejudice in the Castro regime, and the betray-thy-neighbor expectation of a police state. But almost nobody conforms to type. A woman in Diego's building who is part of the neighborhood Vigilance Committee, on the watch for counter-revolutionary activities, turns out to be a good friend to Diego and then to David. Everyone plays one game with the government, but a different one in their private lives. This is a lesson David has to learn. Encounters with women along the way provide a few subplots, but the heart of the story lies in the hearts of the two men. `Strawberry and Chocolate' is credited to directors Tomás Gutiérrez Alea and Juan Carlos Tabío. The former was, until his death shortly after completing this film, the best known filmmaker in Cuba, winning an international reputation in the 1960's for titles such as `Memoirs of Underdevelopment,' a look at life in Cuba in the early Castro years that tempers criticism with prudence. `Strawberry' is smaller in scale and less overtly political. The film was nominated for an Oscar in 1995 and won awards at film festivals around the world (including the Sundance Festival). American viewers may instantly slot it with Hollywood features that show how straight characters learn life lessons from a wiser gay companion (`Boys on the Side,' `As Good As It Gets'). And at times Diego's excesses recall the worst performances of Harvey Fierstein. Yet superb performances by the two male leads eventually move beyond stereotypes they – and the audience – initially share about each other, transforming their unexpected friendship into a statement that puts the lie to official groupthink in a repressive regime.