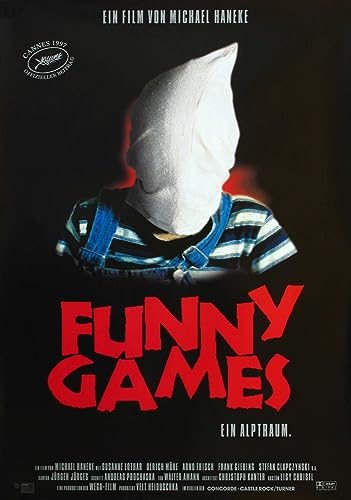 Movie: Funny Games(1998)[tt0119167] Two seemingly well-educated young men, who call each other Paul and Peter among other names, approach a family on vacation. They are, apparently, friends of the neighbors, and, at the beginning, their true intentions are not known, but soon, the family is imprisoned and tortured in its own house violently, which the viewers are forced mostly to imagine and to share a certain complicity with the criminals. It might be some kind of game with the lives of husband, wife, son, and dog, but why are they doing it? Written byLuis Canau <luis.canau@mail.EUnet.pt>

JonathanRimorin on 23 May 2003
I saw this movie again last night, for the third time, and once again had to keep watching each torturous minute until its chilling end. Going through the comments index, I see the expected responses: it was boring: it was pointless: it was too long: it's a satire: the games aren't actually that funny: it involved the audience in a neato way: it's nothing new: it's been done before. So I here offer an interpretation to add to the cacophany of reactions that FUNNY GAMES seem to engender.What this movie reminds me of is the Book of Job, in the Bible, where God and Satan decide for their own amusement to torture this guy Job, killing his family, racking him with boils, and various other divine amusements. While watching this movie last night, I thought of another reference, this time from "King Lear": "Like flies to wanton schoolboys are we to the gods;/ They kill us for their sport." What this movie does is challenge the audience's own involvement in visual narrative -- usually, we watch movies from somewhere on-high and omniscient; we're invisible but we see all; we're voyeurs, just like God. In Haneke's film, we identify not with the victims but with the all-powerful killers as they set about their funny games. The two polite young men are performing their entertainments for us, the viewers; they're slaking our bloodthirst, our desire for gory spectacle - - after all, isn't this why we watch movies like this in the first place? Haneke, however, doesn't play the usual evasions; he makes explicit the audience's participation in violence; and he forces upon us the need to take responsibility for it.I find this fascinating. I also find the negative comments here fascinating as well -- "not violent enough!" "the victims deserve to die..." "all the violence is off-screen..." "no gore at all, 'LAST HOUSE ON THE LEFT' did it first, with more blood...." etc. as being inadvertantly revealing of those viewers' psyche. I especially love the comment made by that one Viking guy, who writes that Haneke's film has "no point," and goes on to say "...I just hope those people break into MY house, so I can break them in two!"I think Haneke made his point.