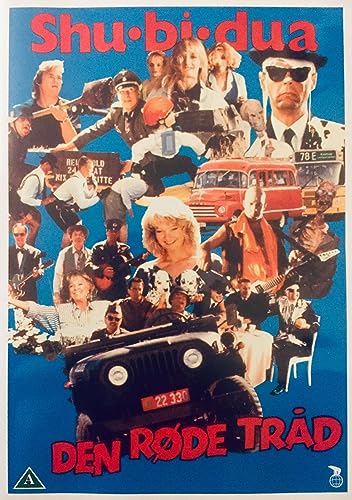 Movie: Den røde tråd(1989)[tt0124106] It's the year 1945 - the German colonel Heinz Heinecken escapes with the German national gold. He's being chased by a special unit - a very "special" unit from England, the Soviet Union and U.S.A.. The German colonel finds the perfect hiding place at Frk. Jensen's guest house. Now it's the year 1989 - and the guest house still exits. So does the old colonel's son, and he wants the gold. Companied by his bodyguards the mean Heinecken Jr. goes to Denmark to find the gold. At the same time the sons of the special unit arrive at the guest house, too - and then the hunt for the gold begins... Written byKarina Hjorth

K-Hjorth on 7 February 2000
Shubidua's first movie is a must for real fans. It's funny and is actually a bunch of small jokes gathered by an overall story. You'll have to watch the movie several times to catch all the jokes, and even though I've seen it more than 15 times, I'm still not sure, I've got it all. I find new details every time, including references to their many songs. You probably have to be Danish to understand it, but if you like Danish humor and culture this movie might be an interesting adventure.