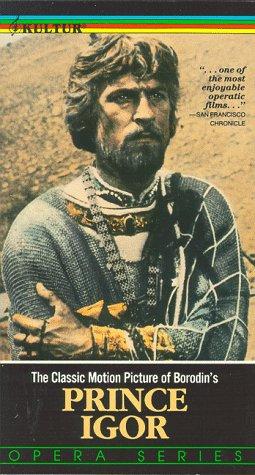 Movie: Prince Igor(1969 (Soviet Union))[tt0170115] An adaptation into film of the opera by Alexander Borodin of the same name, in turn based on the poem "The Lay of Igor's Host".

clanciai on 27 May 2019
This is the third and last of Roman Tikhomirov's epoch-making filmed operas, all three focussed on consistent realism, which is the more spectacular here, since this opera is set in the early middle ages (around 1100), providing very remarkable settings for an opera. The story is equally sensational, as it deals with wild and barbaric Tartars, giving virtuoso performances as both singers and dancers. Contrary to the two previous Tchaikovsky operas, this is a basically very cheerful and positive story, filled with festivities and impressing mass scenes, including several battle scenes, there are even two buffoons here, while the highlights are the gorgeous popular festival at home in the beginning preparing for the war, and of course the Polovtsian dances, which dominate the later part of the film. Like in the previous opera films, the characters and actors are perfect and couldn't be better. Prince Igor's son , who shares his captivity, is the only real tenor and provides a very fitting romantic ingredient to match the heroism and macho bravura. While his father manages to escape their captivity, the son remains and marries the Khan's lovely daughter. The enmity is not very serious here, the Khan and Prince Igor get along fairly well, and the Khan promises to give him free if he doesn't make war any more. That sounds like a rather fair deal and very reasonable diplomaoy.The impressing mass scenes with brilliant cinematography actually makes this opera film the technically and cinematographically most interesting of the three, although the story is the thinnest, as it was not written by Pushkin and completely lacking his interesting psychology. On the other hand, Borodin's music crowns the charm, being more lyrical than Tchaikovsky's and providing tunes and melodies you will never forget, for both their beauty and dashing splendour.In brief, Roman Tikhomirov's three opera masterpieces on film are all outstanding to the highest degree and very different from each other, thus complimenting each other.