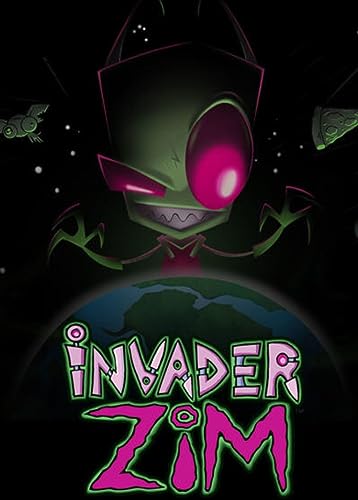 Movie: Invader ZIM (TV Series –)(January 2002 (UK))[tt0235923] Invader ZIM is an eccentric alien soldier from the planet Irk. He was banished from the Irken Empire after nearly destroying his home planet on an early mission. After begging his superiors, the Almighty Tallest Red and Purple, for another chance, they decide to get rid of him once and for all. They trick him into going on a "secret mission" to an obscure planet at the edge of the universe, a planet with the unlikely name of Earth. Their trick works, and now ZIM is intent on bringing down the human race. He disguises himself as a schoolboy, and now the only person who can stop him is one kid - Dib Membrane, a somewhat insane paranormal researcher, who sees straight through ZIM's disguise and is intent on stopping his reign of terror. But neither ZIM nor Dib is very good at their job, and what results is everything imaginable, from a giant hamster destroying the city to both ZIM and Dib being turned into bologna meat. Written byAnonymous

Hancock_the_Superb on 9 July 2002
Jhonen Vasquez - "Johnny The Homicidal Maniac", "I Feel Sick", et al - creates a superbly twisted, hilarious show that, though toned down for kids, still elicts the feel of Vasquez's comics.I suppose you want the plot. Zim (voiced by the superb Richard Horvitz, of "Angry Beavers" and "Grim and Evil" fame) is an annoying, short Irken (an alien race) who was banished to work as a fry cook on Foodcourtia after destroying Irk in Operation Impending Doom 1. When the Almighty Tallest ("Kids In The Hall" alumni Kevin McDonald and veteran voice actor Wally Wingert) prepare for Operation Impending Doom 2 - in which the Irkens will conquer the universe - Zim comes, despite the orders of his superiors. ("You quit being banished!?!" screams one of the Tallest) They attempt to put Zim down lightly, but Zim's determined, so the Tallest send him on a "secret mission" to an unknown planet, giving him a trash-brained robot named GIR (fellow comic book artist Rosearik Rikki Simmons, who worked on "Squee!" with Vasquez, as well as "Sushi Girl" and "Reality Check"). A few months later, Zim just happens to reach Earth, where he tries to blend in as a human (wearing a pompador and contact lenses). The ignorant skool (that's how it's spelled) children fail to notice this, nor does teacher Ms. Bitters (Lucille Bliss), a vampiric, serpantine ghoul who is exceedingly cynical and angry. However, self-proclaimed paranormal investigator Dib (Andy Berman of "The Wonder Years" fame), son of the world's greatest scientist, Prof. Membrane (Roger Bumpass, who plays Squidward on "Spongebob Squarepants"), realizes that Zim's an alien, and the two develop a rivalry.Other members of the supporting cast are just as good: Danny Cooksey ("Pepper Ann", "Tiny Toon Adventures"), Antoinette Spolar, and Vasquez himself (as "Mr. Scolex") appear as various skool children. Dib's cynical Gothic sister Gaz is brilliantly voiced by Melissa Fahn ("Digimon"). Mo Collins and McDonald, again, appear as Zim's roboparents. Besides the superb cast and voicework, the great score and animation (beautiful cel animation mixed with equally good CGI) also make this show extremely entertaining.Numerous others actors/actresses appear in cameos, most notably Olivia D'Abo as fellow Irken Tak in "TAK, the Hideous New Girl".What else is there to say that hasn't already been said? Vasquez has rounded up a bunch of great cult comic book writers (him, Simmons, and Roman Dirge), a cast of veteran actors, and superb music (courtesy of Kevin Manthei), under the direction of veteran animation director Steve Ressel, make a superb combo. Oh, and don't miss the cameos of Vasquez, Ressel, Dirge, and numerous other crew members throughout.Personal favorite episodes: "Door To Door", "TAK: The Hideous New Girl", "Mysterious Mysteries", "Bestest Friends", "The Nightmare Begins", "Battle of the Planets", and "Rise of the Zitboy". Enough said.Ten stars.

The Grim Adventures of Billy &