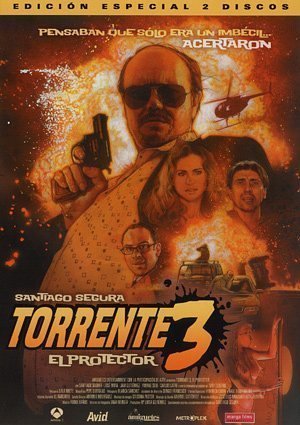 carbuff on 11 May 2015
Same review applies to the entire series of the first four Torrente films--they are very similar in concept and execution, and I binge- watched them all because I liked them so much. I think that this is real love it or hate it stuff, and God I love it. I'm guessing 7 out of 10 people won't appreciate this material at all, while the other 3 who are a bit twisted like me won't be able to get enough. It helps to have some knowledge of European culture and politics, but it's not essential--a well-honed appreciation of outstanding low-brow humor is sorely needed though. Yes, all the films are Spanish subtitled in English, but in very easy to read yellow lettering so it's no big deal at all. Most women I'm guessing will be turned off by these flicks. It's best to watch them in order. They play like the work of some deranged, Spanish genius, love-child of Mad Magazine and National Lampoon hopped-up on steroids, testosterone, tons of junk food, pornography, and some ungodly mix of alcohol and illegal drugs. These satires are rude, crude, lewd, insensitive, offensive, amoral, sexist, racist, homophobic, grossly politically incorrect and hilarious (with likely no socially redeeming value). What more could you ask for? If this kind of material doesn't appeal to you, steer clear; otherwise, bon appetit. As for me, all I can say is, "Please, Sir, I want some more." (I've just noticed that number 5 has been made, and I'm dying to see it.)