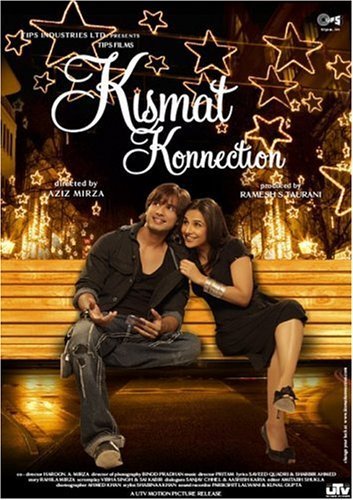 Movie: Kismat Konnection(2008)[tt1105733] Toronto-based social activist Priya meets out-of-work architect Raj Malhotra, and both end up in a series of hilarious misunderstandings. Priya finds out that Raj is attracted to her. She shows interest in him as well, though she is seeing Karan Bahl, to whom all of their friends expect she'll soon be married. What Priya does not know is Raj believes she is lucky for him and may be using her to obtain a contract that would involve tearing down her beloved community center to build a shopping mall in it's place. Written byrAjOo (gunwanti@hotmail.com)

sumanbarthakursmailbox on 19 December 2009
Kismat Konnection is the kind of film you might truly enjoy if the last film you watched was Yes Boss all the way back in 1997. Like most of director Aziz Mirza's films this one too is at its core an old-fashioned tale about a guy-next-door and the clash between his ambition and his middle-class values. Problem is, that kind of premise doesn't quite hold anymore. It's a formula that's been flogged to death many times over, and also because let's face it, it's hard to relate with that kind of naïve idealism in today's real world. Kismat Konnection is simply a rehash of Raju Ban Gaya Gentleman and Yes Boss, but it doesn't have the charm of either of those films because it's constructed from a script that's ridden with flaws.Shahid Kapur plays Raj, a struggling architect in Toronto who hasn't earned a dime in five years, but still manages to turn out in the trendiest of clothes day after day. Raj seems convinced that all he needs is a bit of luck to set him on the road to success. His lucky charm turns up in the form of Vidya Balan who plays Priya, an honest-to-goodness girl who, when she isn't busy ramming her car into Raj every other day, bides her time protesting against the construction of a mall where a community centre currently stands. As luck would have it, the contract for the construction of this mall is exactly what Raj is hoping to land, with a little help from his lucky charm.Director Aziz Mirza pulls out every other plot point from his old hat and applies it in this film -- guy uses girl to further his career, guy falls for girl but she's already engaged, guy suffers from bout of good conscience and decides to give up everything in exchange for girl's love, girl feels betrayed when she finds out guy had been lying all along, guy admits his mistakes in a gathering filled with too many extras and wins girl's heart eventually. You see, you've heard this story before.Intended as a breezy entertainer, Kismat Konnection -- like Mirza's previous films -- banks heavily on the audience's ability to relate to its characters and their simple everyday concerns. But it's impossible to relate to Mirza's cardboard characters who come with no back-story, no explanations whatsoever. Because there's little to count on in terms of story, the fate of this film depends almost entirely on the likability of its leads. Shahid and Vidya deliver earnest performances, but they fail to rise above the flawed script. Saddest of all, they fail to ignite the kind of combustible chemistry one expects in a film of this nature. It doesn't help that the director himself shies away from giving them any intimate moments. The closest you get in terms of romance here, are two hugs between the couple -- both moments seriously lacking in any sparks.The rest of the cast overacts beyond imagination, and a word here for Juhi Chawla who is dumped with the most annoying role she's ever played on screen. How could you do this to such a fine actress, Mr Mirza? Kismat Konnection doesn't work for many reasons, but perhaps its most fatal flaw lies in its snail-paced screenplay which includes so many boring scenes where nothing much happens. It's not entirely unwatchable, because the music's alright and the film's shot in a manner that's easy on the eye. But walking out of the cinema once the lights come back on, you're just glad it's finally over.Believe me the best thing about this film is Himani Shivpuri and her fabulous comic moments. That should tell you all you needed to know about this film.