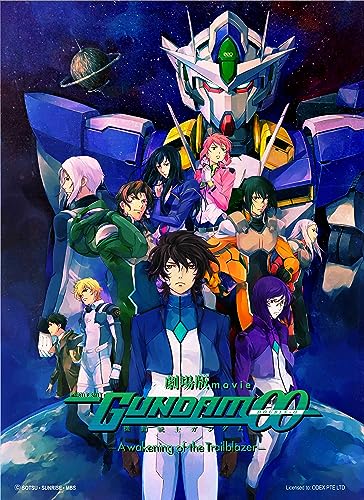 Movie: Gekijouban Kidou senshi Gandamu 00: A wakening of the trailblazer(2010)[tt1726286] The year is 2314, two years after Setsuna F. Seiei defeated the Innovator Ribbons Almark. The world is starting to move toward peace, and other people around the world are beginning to Innovate. However, an abandoned probe which went on an expedition to Jupiter 130 years ago suddenly returns to Earth, though there appears to not carry any sign of life aboard. Soon after, Earth becomes the target of dangerous aliens called the Extraterrestrial Living-metal Shapeshifters (ELS), who have the ability to assimilate Earth's technology. Celestial Being returns to combat the alien invasion with humanity's fate hanging in the balance. Written byAnonymous

DonaldDooD on 17 August 2014
Gundam 00 is just an okay anime. If it weren't for the animation quality and cool designs, it'd be a stale ride. The movie, writing-wise, is worse, and doesn't add to the characters and themes of the series well. There's little development, and the enemy is borderline thoughtless. Monologues alone aren't enough. The half of the film that only serves as setup for the battles is thus pretty pointless.But, wow, are the fights ridiculous. There's usually a dozen mechs, bits, beams, and missiles on screen, with hundreds of metallic aliens in the background. The power level of the Gundams and company are among the highest in the Gundam universe. Few suits exceeded 15 bits in the other series. In this movie, the cap reaches 154!!! The mechs still look good, and their destructive power is the most over-the-top you're going to see this side of Tengen Toppa Gurren Lagann. With a kickass soundtrack to boot, skipping to these fights can add energy to any day.Trailblazer is not a good movie. It boils down to a standard alien invasion movie, that asks you to watch a 50 episode series beforehand. But if you're patient, or willing to fast forward through chunks, you may have some fun. I don't usually go "Wow! Explosions!", but this is so beyond your typical movie it kinda needs to be seen. If you have no interest there, then forget about it.