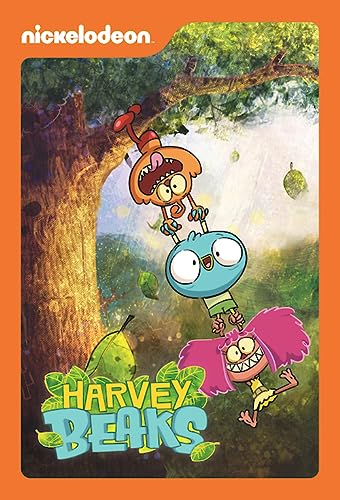 Movie: Harvey Beaks (TV Series –)(2015)[tt3219170] A mild-mannered young bird and his best friends, a pair of rambunctious siblings called Fee and Foo, seek adventure and mischief in the magical forest that they call home.

ImOnImdb on 31 July 2015
Harvey Beaks is a Nickelodeon show that feels like it should be on Cartoon Network or Disney. That's not a dig at Harvey; Nickelodeon has long been the network with the loudest, crudest, and most visually unappealing batch of cartoons. Nick—with the exceptions of the Avatar franchise juggernaut, the passable Kung Fu Panda: Legends of Awesomeness, and the killed-too-soon Making Fiends—is typically all fart and no heart, to put it bluntly.So here we have Harvey Beaks courtesy of C.H. Greenblat (Chowder). Harvey is a good-natured, curious little chick who lives in a beautifully imagined and animated forest with his parents. After countless examples of dumb, loud, angry male protagonists, Harvey's kindness and optimism are a very welcome breath of fresh air. If you're familiar with Cartoon Network's The Amazing World of Gumball, imagine that show's protagonist, but replace the pointless bouts of aggressive stupidity with what feels like genuine childlike naivety and rambunctiousness and you'll get a good idea of Harvey's personality.That's not to say Harvey is an infallible Gary Stu; his resemblance to Pablo, the high-strung penguin from The Backyardigans, comes complete with panic attacks and outbursts of frenetic screaming (no, not Chowder-tier screaming, don't worry); he spits, strips down in public, crossdresses to burgle a greedy merchant, and engages in all kinds of shenanigans that will entertain younger viewers. The trick here is that the jokes and gags—visual, auditory, situational, or otherwise—won't turn off parents or older cartoon fans (>implying).Harvey is egged on by his two best friends, Fee and her brother Foo, a pair of mischievous forest imps. I'll be honest: Going into the show, I was ready to hate Fee and Foo. I just knew Fee would the be the eye-rolling, violent, hates-everybody obligatory female protagonist and Foo would be a perpetually screaming moron. And they would hate each other, or something stupid like that because kids can't handle positive, heartfelt characters? Wrong. Fee and Foo are adorable. Almost too adorable for us to believe that none of Harvey's other friends like them. When we learn their bedtime routine involves punching each other to sleep (it's nice to see that Fee isn't magically shielded from slapstick antics simply because of her gender), we fear the scene will descend into cringe-inducing John K.-esque black eyes and bruises. Instead, the twins playfully roughhouse until they doze off in each other's arms. It's obscenely cute, and a good example of a positive sibling (or family) dynamic that isn't unrealistically sanitized, but isn't stupidly antagonistic—something hard to find in the contemporary cartoon world.So the twins are spot-on. A perfect balance of being wild and troublesome without being overly gross, violent, or unlikable. They keep Harvey from being too perfect, but also are street-smart enough to reel him in when he gets carried away.In creating Harvey Beaks, Greenblatt has said he wanted to give viewers a show with genuine emotion, and so far, he's nailed the characters. Besides the three main protagonists, there's a cast of pretty-well-fleshed-out supporting characters, most of whom also avoid falling into unlikable clichés. Harvey's mom isn't a naggy perfectionist. Her husband isn't a clueless idiot. Harvey's friends each fill a familiar role—the artsy one, the party animal (pun), the exxxtreme one, the dorky one, Lumpy Space Princess from Adventure Time–but they also have enough distinguishing features to avoid being boring.Another big plus is the rich—dare I say, enchanting—world these characters inhabit. Harvey's family lives in a beautifully drawn forest that's part Miyazaki and part Berenstine Bears: one moment the characters are in a modern town with buildings built directly into trees, and the next they're discovering ancient lodestone, a living giant stone finger, or a city of forest ghosts. It's a charming, unique environment that sets the stage for all kinds of entertaining, mysterious stories.The stories, like the characters, are nothing revolutionary, but it's so nice to watch an episode and think, cynically, you know what annoying clichés it'll fall into, only to be proved wrong. Some of episodes do feel flat, but that's mostly because when the show hits its stride, it really feels special; The Spitting Tree begins passably enough, but ends with a magical final scene that evokes the joy and excitement of overcoming childhood fear of the unknown to discover new experiences. Someone's Been Stealing My Stuff and Pe-choo avoid simplistic moral messages about right and wrong and instead focus on problem solving and finding creative ways to approach a challenge. None of this is handled with too much seriousness; it's imaginative without being pretentious, creative without being obscure, familiar without being cliché, and cute without being cloying. Oh, and the musical score, composed by Ego Plum, is extraordinary.Who should watch this show? Kids, if they don't have ADHD or recoil from positive emotions; older cartoon fans, if they don't require sex appear, violence, or EDGE. Give it a chance, and don't dismiss it simply because it shares a network with zombie SpongeBob, Sanjay and Craig, and Breadwinners. I don't know why creators still pitch to Nick, considering they seem to be trigger-happy when it comes to canceling their few good shows when they aren't instantly SpongeBob 2.

Back at the Barnyard

The Upside Down Show