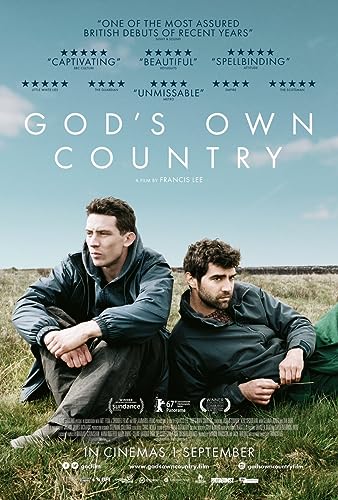 elliest_5 on 4 July 2019
Everyone in the reviews is like "Brokeback Mountain this" and "Brokeback Mountain that" reducing both films to the absolutely superficial account "just a gay love story involving sheep herding". This is such a completely different tone, scope, setting, storytelling, type of character portrayal - in fact a completely different cinematic tradition from Brokeback Mountain, that it makes me wonder if people assuming an influence/considering the comparison obvious even saw the film.There's five main characters in the film: Johny the frustrated teen/young adult who reluctantly takes over his dad's farm while he's recovering from a stroke, the dad - a typical hardworking man of few words who, we learn, raised his son alone, the gran who is caring but no-nonsense/unsentimental, the newcomer Gheorghe, a young Romanian farmer with lots of experience and genuine interest for the farm, and then there's the farm itself. The farm has needs, moods, emergencies, and ultimately drives the plot.It's not a story about the discovery of sexuality, it's a story about the discovery of love and camaraderie, as well as a story of acceptance. Johny's journey towards settling into a life as a farmer is more or less that of the five stages of grief: denial (assisted by heavy pass-out drinking), anger, bargaining, and depression. In this journey Gheorghe becomes his guiding light.It's beautifully shot, nicely paced, and naturalistically acted. I can hardly find a fault in the artistic result. As for its emotional impact, I can say for sure that I was moved, not only by the love story, nor just by the understated yet powerful portrayal of family bonds, but also by the portrayal of farm life, which (having grown up in a similar setting myself, albeit far far away from the hills of Northern England) made me think how people can be united by common experiences a lot more than by language, ethnicity etc.